We would like to know how you are holding up during all of this.

If you have time, please take a few minutes to answer our eight-question survey.

Income And Other Support Measures

While the scale of the recently announced package is 108 trillion yen (the biggest ever), the actual expenditure from the national budget is only 18.6 trillion yen.

The only income support that is direct to workers is a one time payment of 300,000 yen per family (including singles) subsidy.

Case A: Monthly salary DOES NOT decline by more than half.

The monthly income of the head of household in any month between February to June 2020 compared to the same month in 2019.

Case B: Monthly salary DECLINES by more than half.

The monthly income of the head of the household in any month between February to June 2020 compared to the same month in 2019.

We are still waiting for word on the application process.

Have You Been Sent Home From Work?

This is happening quite a lot now – especially since the declaration of the emergency measures.

Since the beginning of this crisis, the union has stated that if you are sent home you must be paid a KYUGYO TEATE of a minimum of 60% of your average daily wages. 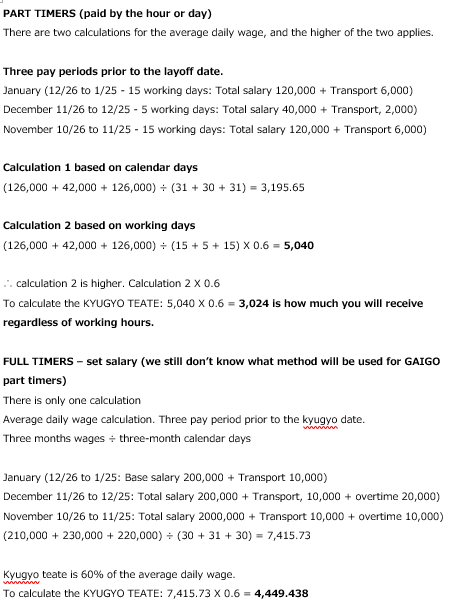 Some employers are balking because they say that this is due to a force majeure; but at our most recent visit to the Osaka Labour Bureau, the position is that employers must still pay even since the emergency measures.

They state that if employers are having a hard time paying this, they should apply for a subsidy (see below).

Yes, subsidies are available for employers who pay KYUGYO TEATE.

Not being paid this? Please let us know at www.generalunion.org/consultation.

Board of Education ALTs and Private Schools

We will be submitting a letter to city and prefectural boards of education over employer demands that teachers come into work everyday despite the fact that there are no students and preparation can easily be done at home.

Why have teachers come into work just to risk getting contaminated?

The Ministry of Education put out a notice to prefectural boards telling them that where possible, working from home should be encouraged.

We have been involved in securing wages during the pandemic.

So far, AEON, Berlitz, ECC and GABA have closed all schools in at least the prefectures affected by COVID-19 (GABA in all, and ECC in many more), and are paying KYUGYO TEATE above the minimum stated in the Labour Standards Law.

At smaller language schools, the problems seem to be more severe.

At Peppy Kids Club, the union has received many consultations stemming from their closure in March.

The union is now preparing demands for this school.

Most of our reports from universities is that members are still being paid full wages, but are concerned with some moves not to do this at some national universities and public universities.

We will be following up on these rumours.

Many members report that their universities will not be opening as planned and there is a move to online lessons.

• Counselling services and hotlines in other languages

• Ministry of Health, Welfare, and Labour information in 15 languages

We are endeavouring to do all we can to help all workers during this crisis and hope that you will keep making this possible by joining the union and standing shoulder to shoulder with workers throughout Japan and the world.