Following a dismissal via contract non-renewal, I found myself unemployed after having put all my eggs in one basket. After teaching part-time at various universities around Kansai for fifteen years, I took a full-time job teaching English majors at a low-level private university.

However, I completely overestimated my students’ motivation, and struggled with numerous instances of cheating in my writing classes.

After a rough three years, I was not surprised when the university verbally informed me that my contract would not be renewed.

After the initial shock of rejection, I came to see my situation like that of a pro-soccer player who didn’t quite fit in with a losing team’s style of play, so this became an opportunity to find a better fit, take a break from work (after twenty-seven years of teaching English), and collect unemployment benefits (for the first time ever), since I could not find another full-time university job starting this fall.

One tip I learned only too late: employees should know that in case of a non-renewal of their contract, verbal or otherwise, they should be sure to formally request a contract renewal in writing.

I know that the General Union often does that annually for its members; but, in my case, I didn’t get the union involved since I had no claim and just had to accept their non-renewal, which – as stated – was only delivered verbally (three months before the end of my contract).

I had just assumed that it was obvious that I wanted to keep my job!

However, I should have at least sent an email asking for a renewal in order to have evidence of wanting to keep working there – otherwise the employer could mark “renewal not requested by employee” on the unemployment document, which might affect benefits (such as 90 or 180 days of eligibility).

My former university did this on my document, but I disputed that to the Hello Work staffer, who (thankfully) took my side.

Hello Work Visit #1 (9/5/17): Date of Confirmation as a Qualified Recipient

After my contract officially ended on August 31st, my former employer immediately sent me an official unemployment document (showing my salary for the past 6 months), which arrived on Sept. 4, so I took it to Hello Work the next day (along with my residence card, two photos, bank book, and my “My Number” card), in order to claim benefits as soon as possible.

There were parts of the form for me to fill-out (in Japanese), and another three forms to be filled out at Hello Work. 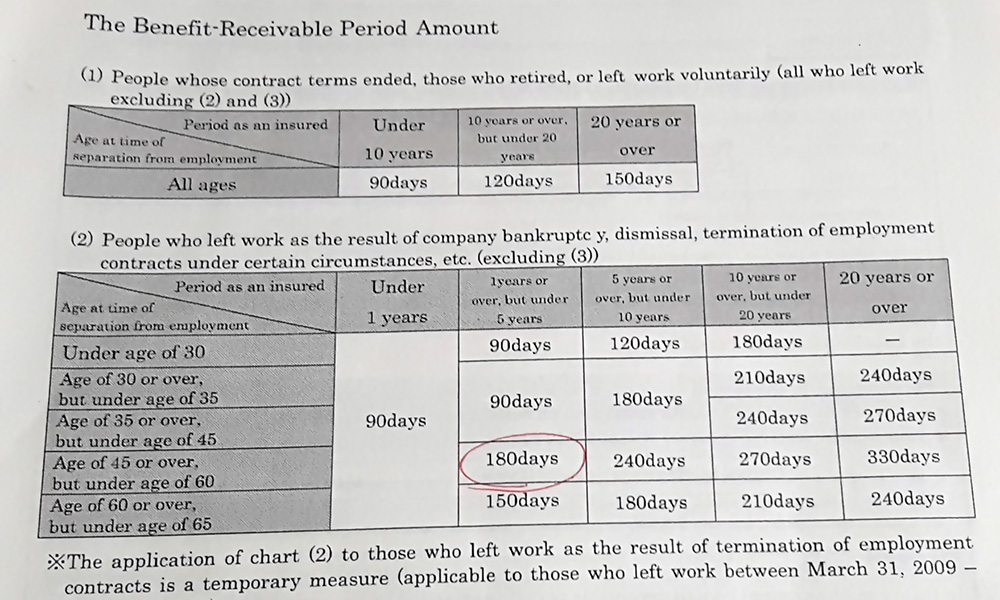 Note: It’s highly recommended to bring a bilingual friend if you’re not fluent in Japanese. I went alone, and the staff helped me with the forms, but there were several times I had to call my Japanese wife for translation.

Hello Work gave me an “Unemployment Insurance Benefit Manual” in English, which is about 40 pages long, and a timeline in Japanese.

According to their schedule, I have to go back in 28-day intervals: on October 3rd, October 31st, and November 28th.

The day you first visit (Tuesday, in my case) will be the same day that you have to return every 28 days, so be sure to carefully choose your ideal day from the start if you have a preference.

I was also told that I am eligible for 180 days of unemployment benefits (rather than 90 days), and that my first payment would be on Oct. 10 (a week after my Oct. 3 visit, and 28 days after my initial visit), if things go smoothly.

The benefits payment depends on your age, how long you worked there, and your pay for the past 6 months – which in my case amounts to 50% of my salary.

I was originally scheduled for an explanation seminar on September 13th with other unemployed people; but when I told them it would be pointless due to my limited Japanese ability, they told me to come in with my Japanese wife for a private explanation one day before.

I was told my daily rate of unemployment benefit, and given three important documents:

They explained how to fill-in the application form, and then answered any questions about job hunting.

One thing I was concerned about was losing my benefits if I did any one-off English teaching jobs, such as Halloween or Christmas parties for kids.

I was told that I should report any work I do, and that it might reduce my eligibility period from 28 days for that period (i.e. to 26 days for 2 days worked), but that I would still be eligible for the full 180 days of benefits, which would just be added to the end of the 6 months. 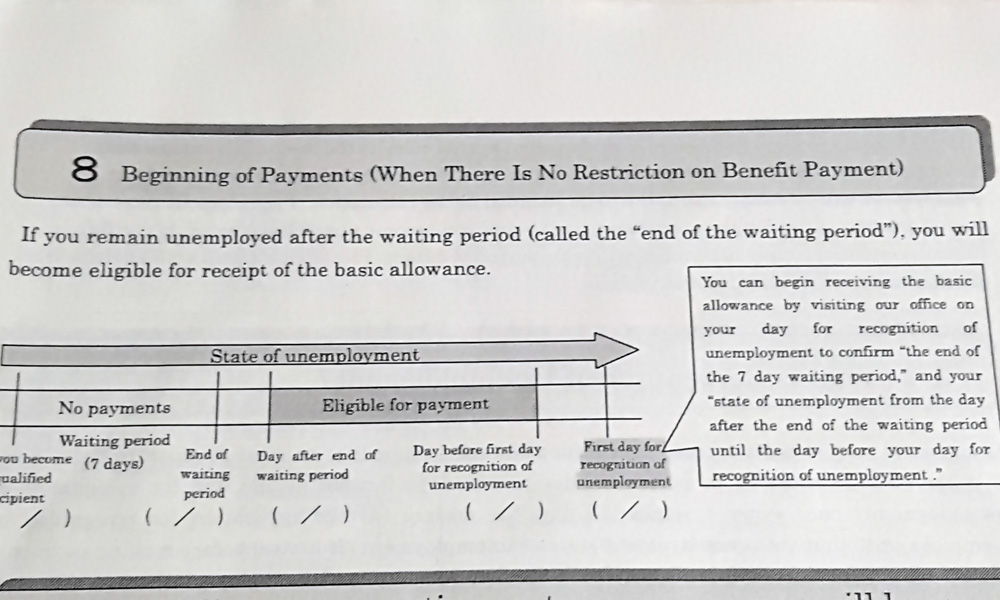 Another thing I wondered about was losing benefits if I got offered a teaching job that started next April (when the school year begins), and was told I would still be eligible since I was not working yet (and could still keep looking for a better job).

In addition, if I got offered a part-time job starting now, say for one day a week, I could still claim unemployment for the other days.

For example, if I got a job only on Fridays and worked all four Fridays in a 28-day period, I could still claim the remaining 24 days of unemployment benefits in that cycle.

This visit was pretty much a waste of time (in my opinion), and could easily have been combined with the second visit during the previous week.

However, according to their system, the second visit is a group explanation seminar, while the third visit is a one-on-one personal consultation about what kind of job you’re looking for.

Accompanied by my Japanese wife, I told them I was looking for a full-time university job teaching English (same as my previous work), and that such jobs usually start in April.

Basically, the staff checked their computer system, and told me the codes for “instructor” jobs (199-01 and 199-02), and – when I asked if there was any special code for university jobs – also dug up 198-01 (which includes all staff, not just teacher).

These codes can be entered into their computers each month and count as one of the required “job-searching activities” to get unemployment benefits.

During the first “month” (28-day cycle), only one such “job-searching activity” is required, and the consultation visit counts as that activity.

After the first month, two job-searching activities are required per cycle, which basically includes:

My next visit on October 3rd is the important one: I will hand-in my first “Application Form for Recognition of Unemployment”, which should result in my first payment of benefits seven days later (on October 10th).

Therefore, at the earliest, it will take about 40 days from the end of employment until the first unemployment benefits arrive.

Hopefully, from here on out, it will just be a matter of: 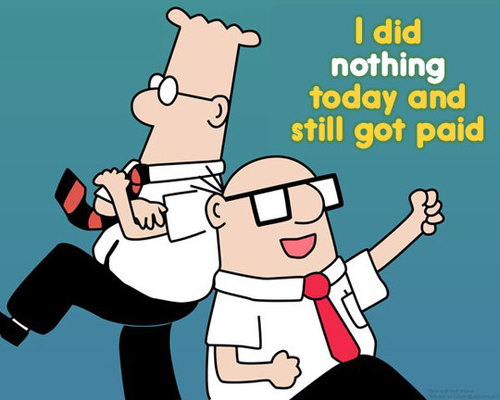