If you work (or plan to work) in the Japanese public school system – either directly via the local government or contractually via a dispatch company – then this is information that you absolutely need to be aware of. 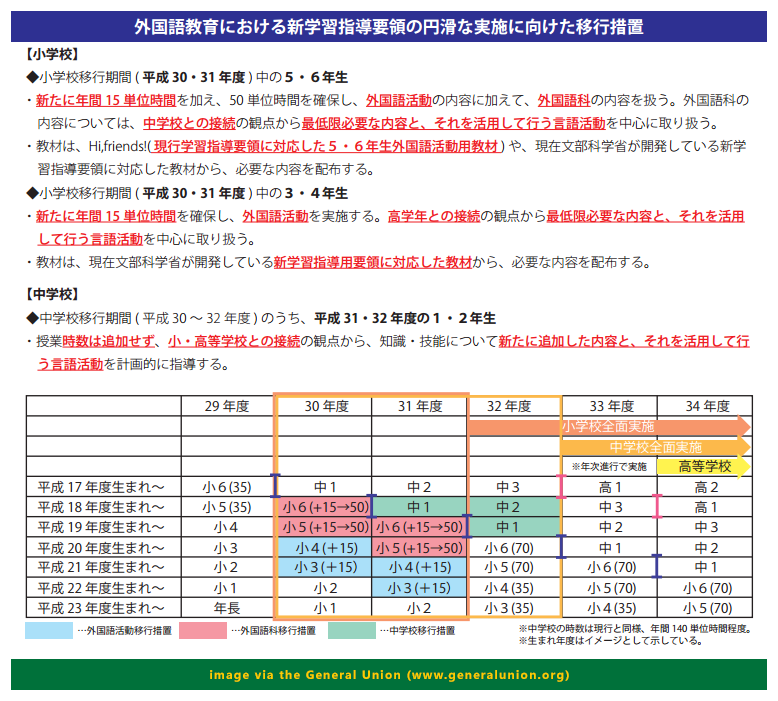 From 30年度 (April, 2018), the changes to the elementary school curriculum will be as follows:

This is the first stage of the transitional implementation of the new curriculum.

While some schools may already currently hold English lessons for 小１ to 小４, such lessons are not a legal requirement.

The second and final stage of the implementation of MEXT’s “New Course Of Study In Foreign Language Education” will occur in 2020.

From 32年度 (April, 2020), further changes to the elementary school curriculum will be as follows:

To support the new curriculum, the Ministry of Education also plans to replace the current elementary school textbooks (“Hi, Friends!”) with a new series of textbooks that will begin from the start of 小３ and finish at the end of 小６．

From what we have seen, the contents of the current (2017) 小５ and 小６ textbooks will become the content for the 小４ and 小３ textbooks (respectively), while 小５ and 小６ will be taught additional higher-level English based on that foundation.

At the time of writing, the General Union does not know if the textbooks for junior high schools will also be replaced in order to “bridge” the transition between 小６ and 中１ English.

The concern here, therefore, is that the junior high school students of 2020 and onward may find themselves spending an even longer time retreading the same ground that they walked in elementary school.

We can only hope that this will not be the case.

The Ministry of Education has grand plans, but the actual question of “how” they’re going to bring these plans to fruition is something that doesn’t seem to have been given much of an answer beyond “don’t worry about it”.

In 2020, the number of mandatory English lessons at elementary school will have more than quadrupled compared to the number of lessons required by law in 2017.

With just ten months to go (as of the time of writing) before ３０年度, the actual logistical details of how the government will implement its lofty “New Course Of Study” are relatively unknown.

We know, for example, that ALTs feature a prominent role in making the “New Course Of Study” work, but we don’t know where the Ministry of Education plans to source these ALTs from.

As of 2016 (according to MEXT’s own statistics), there were just 18,484 ALTs working in schools in Japan, with around 25% of them being JET Programme ALTs.

Given that English at elementary schools alone will raise by around 400%, does the government plan on recruiting more ALTs to sate this demand, or does it plan to make do with the current numbers?

If the government plans to recruit more ALTs, can we expect more direct hire positions?

If not, does the government plan on allowing greedy dispatch companies to do all of the dirty work for them?

In that case, without desperate regulation of the industry (up to and including nationalization?), just what will the future of English education and the ALT profession look like five years from now?

If the government’s reaction to the current nursing care labor shortage is anything to go by, we might already have an answer.

According to the Ministry of Health, Labor, and Welfare, Japan will have a shortage of around 380,000 nursing care staff by 2025.

In an attempt to fill the shortage, the government has passed legislation to bring more foreign workers into the country.

Can we expect the same thing to happen in public schools?

For now, it seems that the only thing that we can be certain of is that the government’s “New Course Of Study In Foreign Language Education” is coming whether we like it or not.

Let’s hope that the country is ready for it.