Is NOVA a “Black Company”?

No, they haven’t, as far as we know (“no one died this week so keep up the good work” isn’t really something that a company boasts about in its weekly newsletters).

Even so, should “how many people have actually killed themselves, though?” be the yardstick against which the merits of a company are measured?

IN WHICH WE COMPARE BAD COMPANIES TO CANCER

Here’s the danger with judging a company based on how comparatively bad it is to something else: it’s a slippery slope that excuses one terrible thing because it isn’t as terrible as another terrible thing, even though they’re actually both terrible things.

To illustrate this further, consider the following analogy: testicular cancer isn’t as bad as lymphoma, but it’s still cancer.

“In the grand scheme of things, I don’t need to receive treatment because it’s not lymphoma” isn’t really a sensible thing to say.

It doesn’t matter what type of cancer it is, cancer is cancer.

One type might not be “as bad as” the other, but they’re both serious, and they’ll both kill you if left untreated.

Now, whether or not you agree with our “argument from analogy” will be a matter of personal perspective, but we hope that you can at least understand the point that we’re trying to illustrate here.

BUT IS IT A BLACK COMPANY?

Anyway, let’s get back to the original point: does NOVA fit the criteria of a “black company”?

In the case of foreign employees (at least, because who knows what it’s like for Japanese staff), there doesn’t appear to be excessive amounts of unpaid overtime.

Therefore, in regards to that one aspect, it could be said that this makes NOVA “better” than other companies who do actually put their employees through the overtime wringer.

However, in the General Union’s opinion, (ignoring the independent contractor issue and, like, everything else) there is at least one major thing that qualifies NOVA for the “black company” label:

NOVA does it best to cheat people out of health and pension (shakai hoken), and it does this by pretending that people don’t work for 6 minutes in between lessons.

This might seem like a trivial thing, but it’s actually a much bigger deal than some people would have you believe.

Not being enrolled in shakai hoken has workers losing maternity leave benefits and sickness benefits that pay two-thirds of a regular salary for up to 18 months; it means retiring with a significantly smaller pension, and it can eviscerate disability pensions.

These things leave people in a terrible financial state, and it would not be a stretch to say that we have seen people almost destitute because of such exploitation.

AN ANECDOTE THAT’S CLOSE TO HOME

Many of you may be familiar with our union chair.

However, some of you may not know that he was suddenly disabled some years ago.

Had his company not enrolled him in shakai hoken, he would have been left with no income while he waited to have a pension approved.

Instead, he was able to receive 2/3 of his salary for 18 months.

More significantly, though: without shakai hoken, he would have been left with a monthly pension of just 70,000 yen.

In contrast, shakai hoken qualified him for a pension of over three times as much.

It doesn’t take much imagination to envision the differences between the real union chair that was enrolled, and the alternate-history one that was not.

Therefore, with this in mind, does NOVA qualify as a “black company”? 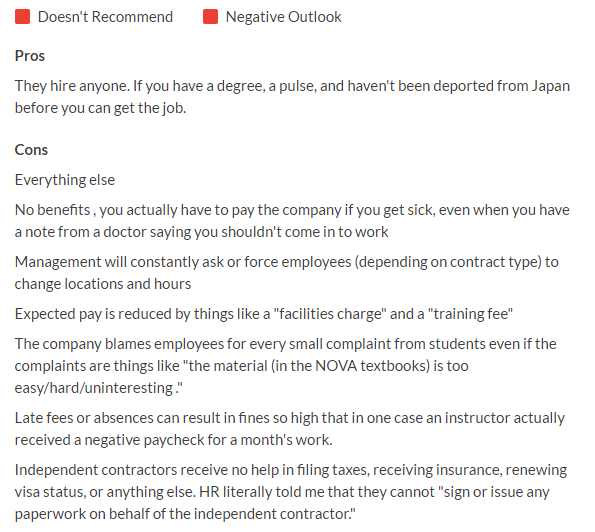