Having seemingly decided that the idea of company towns is long overdue for a renaissance (what’s next? Interac Debit Cards?), Interac has decided to “announce the opening of the Interac Mobile Phone Rental Service to all current ALTs” as a “type of “fringe benefit” for ALTs”.

This announcement has been met with suspicion by a few of our members, with people commenting that this new service “doesn’t feel right” and wondering what Interac’s angle actually is.

Now, we’re not saying that anything underhanded is going on here, but we do believe that having mixed feelings about such an announcement/service is certainly warranted.

It could well be that Interac have nothing but the best of intentions in providing a service like this; and yet, even if that’s the case, one has to wonder how much thought they put into this, and what the company is getting back out of such an arrangement (considering the potential for disaster that oozes from such a scheme).

Before we ponder such disastrous potential, however, let’s take a look at the announcement in more detail:

The cited benefits include:

• Up to 50% off store prices!
• No large initial cost incurred at a retail store.
• Unlimited free calls (domestic only) to mobile and fixed phones + data (5GB or 20GB plan) + handset (4 to choose from)
• Charges start with your first full month of use.
• Payment by payroll deduction (no credit card needed).
• 24/365 SoftBank English support helpdesk.
• Insurance included in case of breakage/battery change, etc.

The goal of the Interac Rental Mobile Phone Service is to make your life easier in Japan by providing a top-tier phone easily, quickly, and with minimal hassle.

We have four types of very popular phones and a 5GB or 20GB monthly plan. If you are more than a light user, we recommend the 20GB plan. Depending on the device and plan, we are offering a service of up to a maximum 50% off the retail shop price. 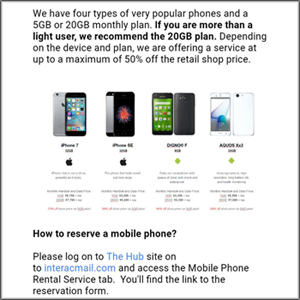 IN WHICH WE PONDER THE POTENTIAL POSITIVES

Now that you’ve seen the announcement and learned the details, it’s important to note that this article isn’t setting out to condemn the (rather long-winded titled) Interac Rental Mobile Phone Service as being a terribly sinister plot that seeks to destroy siphon your finances or steal your data or something.

Given the often transient nature of people who come to Japan and for a dispatch company or at an English conversation school as a means to an end (namely, “the experience”), it’s easy to see why Interac would offer such a “service”, and how that service would be appealing to certain people.

If you’re new to the country, getting a phone can sometimes be difficult (especially when you don’t have money to spare or you run into SoftBank staff who, against company policy, are reluctant to offer you a contract because they don’t want to be the one who gets yelled at the next time someone flees the country with the latest smartphone).

Telecommunication companies also often require a two-year commitment in regards to contract terms, backed up by a hefty cancellation fee (plus the outstanding cost of the handset) should you decide to terminate the contract early. That’s even before you consider the documents that you need and the things you have to understand a sign and… well, it can be a bit daunting, which this service evidently seems to be an alternative for.

Interac also has its own faux-intranet (via Google Apps) through which they feed schedules and information to internal company e-mail addresses.

Having shifted the bulk of their internal employee resources to the Google App platform, Interac – perhaps now more than ever – has put itself into a position in which it needs its employees to be able to access the walled garden that they’ve created.

In considering this angle, perhaps we’ve tapped into the entire reason such a “service” has been created: Interac fenced off their resources before considering whether or not their employees can actually get behind the fence or not.

AND THEN WE PONDER THE POTENTIAL PROBLEMS

That’s not to say that we don’t have concerns about this “service” though; and, boy, are those concerns heavy.

Here’s the thing: that lack of forethought that we’re theorizing could have lead to the service being a solution to the problem? It might just create a bunch of other problems in turn.

• If the “Interac Mobile Phone Rental Service” is (as the name suggests) a rental service, who actually owns the phone?

• If you are renting the phone, is there an option for the phone to eventually become yours (unlike, say, their rental cars, which are just a money hole)?

• How long is the rental contract? Is it per month? Per year? Per two years?

• If you are not the owner of the rental phone (again, as in the case of a rental car), is your privacy secure?

• 20GB on a 4G/LTE connection doesn’t go very far (a dozen YouTube videos or so) on a smartphone. What happens when someone hits the limit?

• If hitting the data plan limit results in a severe transfer speed cap (as in usual contracts), how will employees be able to access information?

• What if they don’t have a home WiFi connection to offset the limited data plan?

• If going beyond the data plan results in additional data fees, who is on the hook for that?

• If you decide to leave Interac, what happens to your rental phone or (more importantly) your phone number?

• Will Interac have people sign separate contracts to grant permission to deduct money from their salary?

• Will Interac just automatically (and technically illegally) deduct it without any separate agreement?

• Doesn’t this conflict with their work regulation policy of not taking personal devices to work assignments?

• Don’t “current ALTs” already have their own phones (considering it’s a contract requirement)? If this isn’t for new employees, then who is it actually for?

There are a bunch of other issues that we can probably think of if given enough time (feel free to add your own on Facebook!), but you get the general gist of the pitfalls that such a scheme may present.

As we’ve noted, while it is certainly strange to see a company offer a “service” like this to its employees (no matter how it’s dressed up), and while we wonder how much of someone’s personal life Interac will seek to infringe upon (see: rental car, rental apartment, rental phone, wanting to know where employees are travelling in their free time… are we forgetting anything?), there are certainly positive aspects to such a “fringe benefit” for certain people in certain situations.

In addition, the pricing difference between the two isn’t even really worth getting excited about, given that the “discount” (such as it is) is on the handset, whereas the lion’s share of a smartphone’s monthly bill is usually the data plan.

Finally, there are a lot of “unknowns” that – as we’ve imagined – could conceivably lead to issues in the future if not properly spelled out and planned for in advance.

Ultimately, you are an adult who is capable of making your own decisions, and what you do with your money is entirely up to you.

All we ask is that you think carefully about the benefits vs the disadvantages that such a deal comes with when compared to the usual, private option.

Basically, we’re a little worried that someone, somewhere, in the near future, is going to write a “Dear General Union” e-mail that reads: “I didn’t notice that Wifi was turned off and I went over my monthly data limit and now Interac say that I owe them ¥516,720. Please help.”

Just don’t order any phones from Interac while drunk, is what we’re getting at.