Of course, if such consequences are applied fairly and within the boundaries of the law, they are perfectly legal.

So why is it that these very same companies think that it’s perfectly acceptable to not pay you for the work you do for them?

There are two simple reasons why companies indulge in wage theft:

(a) not paying you for work saves them money, and (b) pretending that your work doesn’t exist keeps employees under the mythical “30 hour per week” line for mandatory enrolment in health and pension insurance.

In fact, it was at the time that the government was cracking down on non-enrolment that NOVA introduced this kind of “minute shaving”, and the new NOVA has kept the tradition alive.

So, how does this work at NOVA? It’s relatively simple: 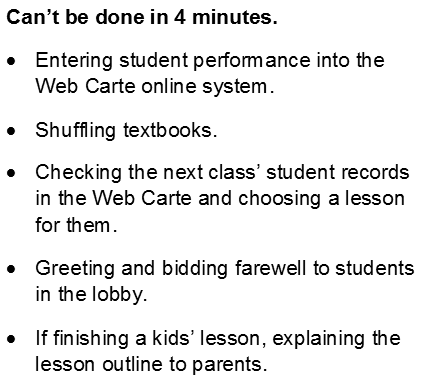 Teachers are then paid for the 40 minutes of actual lesson time, two minutes of preparation time before the lesson, and two minutes of time afterwards to do the reports and clean up (see the sidebar for all their work).

This leaves six minutes that the company told the union that they want employees to have as “rest time” so they “don’t become fatigued”.

It certainly sounds like good management to us – if any of it was actually true, that is.

OF STOLEN TIME AND STOLEN PAY

The fact of the matter is simple: teachers ARE working during this “rest time” as it is not possible to finish the necessary work – work that the company REQUIRES of them – in just six minutes.

In response to union concerns that there are not enough computers for teachers to complete their paperwork, the company told us that teachers “could wait” for a computer to become available.

When we reminded them teachers only have two minutes in which to wait for a computer to become available and THEN do their required paperwork, they suggested “taking the break first” until “a computer opens up”.

However, unpaid breaks don’t work like that – there must be a set time, and that time must be completely free.

A simple example to help visualise this rule is that of a secretary who sits and eats lunch at their desk.

The company might say that the phone probably won’t ring during the secretary’s lunch break, but that the secretary should answer the phone anyway if it does happen to ring because it’ll “just take a few extra minutes” of her time.

No. That’s not how it works. Even if the phone doesn’t ring, the company is still assigning work to the secretary during time which should be completely free of such work.

Unpaid breaks must be set and unfettered with any work duties.

PUSHING THE LAW TO ACT

The union has now filed a complaint at the Labour Standards Office (LSO) on behalf of union members, but we all know that – without a push from the union – the LSO is usually about as useful as a chocolate teapot.

Actually, we don’t even have to pretend that the LSO is slow to act – we’ve already started to see it.

In response to our push, the LSO called us to say that there is “no way to prove” that the teachers work during these 6 minute intervals. “No time card” is the excuse.

Do they really think that a school could function if there were timecards and you punched in an out every 44 minutes?

There ARE ways to prove it: talk to the teachers; visit the school; collect evidence; have the inspectors actually, you know, INSPECT. (It’s right there in the job title!)

It should come as no surprise that we’re going to keep fighting the Labour Standards Office on this one because, well, is it REALLY too much of a hassle to enforce the laws that you’re supposed to be enforcing?

Before anyone leaves this article accusing the union of being petty for complaining about six minutes, just stay and look at the math, because it all adds up over time and people.

Here’s an example of how it breaks down:

Teacher A is on a 37 lesson per-week contract for a salary of about ¥240,000 per month (there are many small allowances, so pay may vary month to month).

Hold on, though, because we’re not done yet…

Keep in mind, that’s just ONE teacher, too!

So why doesn’t Nova just say that the 250,000 yen covers the lesson time PLUS the full ten minutes between classes which means 50 minutes per class?

Oh, hey. The teachers would be unquestionably eligible for shakai hoken as they go over the 30 hour threshold. What a remarkable coincidence!

We’re not giving up on this fight because there is too much at stake here to just leave this issue alone. We’ll let you know how we get on.

In the meanwhile, is your company stealing from you? If they are, let us know about it.