According to its GaijinPot profile, it employs between “51-100” people.

Being the “successful chain” that James English School considers itself to be, one has to wonder: are the teachers who work there reaping the benefits of that prosperity, or are they the ones who are paying the price for it?

OF COURSE, THERE’S NO SHAKAI HOKEN

1.31 Details of Duty Hours
Duty-hours of teachers on this contract will be 29 hours and 45 minutes a week…

The first black mark we find in the contract is the infamous “29.5 Hour Rule” that dispatch companies and English conversation schools alike use to deny their employees their right to be enrolled in Employees’ Health and Pension Insurance (社会保険 – shakai hoken).

It’s a little suspicious that the working week just happens to be fifteen minutes short of thirty hours, isn’t it?

As we often mention, companies use the fictitious “shakai hoken threshold” of a ” 3/4 of a 40 hour week (based upon a Japan Pension Service internal memo from the 1980s) to illegally avoid enrolling their employees in the shakai hoken system (and, more importantly, to pocket around ¥30,000 per month per employee).

This one happens to be “29.75” instead of “29.5”, but the outcome is the same: by keeping the hours just under thirty hours, James English School is able remain in that “sweet spot” of being able to break the law while simultaneously avoid invoking the wrath of the Japan Pension Service.

Suffice to say, the inclusion of such a clause (and the denial of shakai hoken enrolment) is always a big concern.

The contract later states that working hours outside of 9 a.m. to 9 p.m. will be considered overtime hours, but that doesn’t answer the question of how long a person can expect to work, per day.

1.1 Teacher’s Responsibilities
To teach English and English conversation to students attending regular classes, company classes, groups and private individuals; to attend scheduled teachers’ meetings; to participate in school sponsored seasonal events; to proofread when assigned; to teach languages other than English when necessary.

1.2 Professionalism – All teachers are expected to:
Prepare complete lesson plans for each class; attend and make worthwhile contributions to the teachers’ meetings; keep accurate attendance and class summary records that are readily available to management for all credited teaching hours; make reports on company classes when requested; evaluate each student at the end of each term; assist management in teaching related jobs; consult and advise students.

James English School may tout a “29 hours and 45 minutes” working week, but the number of duties that the contract cites that a teacher must do seems rather excessive. In this case, it could be that these duties seem more involved on paper than they actually are in real life, however. 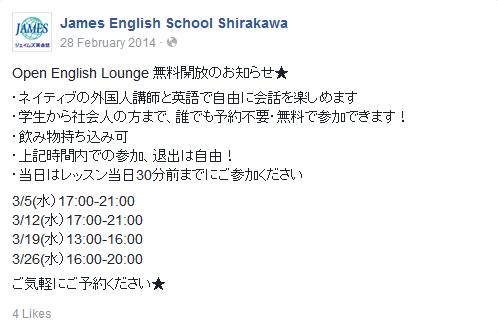 What’s concerning is that, as the contract states that this time is “not considered teaching hours”, this appears to be twenty hours (per month) of unpaid work.

1.4 School Sponsored Seasonal Events
Teachers must participate in the school sponsored Christmas party. December 25 will be given as a paid day off to compensate for this party. Teachers are expected to participate in any other school-sponsored events. Even though these events shall be free of charge to teachers, this time is not counted as working hours and will therefore be unpaid.

Teachers must – MUST – participate in the school Christmas party. However, it won’t be “counted as working hours”, and “will therefore be unpaid”.

2.1 Monthly Pay Day
The teacher’s final salary will be paid on the last working day of valid contract payments. The final salary is subject to garnishment in the event that the teacher fails to meet obligations to which James English School is a party.

The ambiguous wording of this clause is concerning because it essentially grants James English School the power to deduct money from a final salary for whatever unspecific reasons they deem justified under the broad scope of “obligations” (whatever those may be).

The problem that arises from this that there is a fine line between an “outstanding fee” and a “contract termination penalty”, the latter of which is a crime under Article 16 of the Labor Standards Act.

While the contract does not explicitly state a fixed amount, these nebulous “garnishments” that an employee may be subject to for “fail[ing] to meet obligations” sounds like an less-than-subtle threat that penalties may be applied depending on the whims of the employer.

Perhaps that isn’t the case, but the wording remains ominous.

A non-certified teacher, upon arrival, will be expected to enroll in a TEFL correspondence course. Teachers who do not obtain TEFL/TESOL/TESL certificate in the first year may not be offered a contract for the next year.

If a TEFL requirement was so important, surely this would be a requisite FOR employment, not something to be attained AFTER employment.

YOU KNOW, “LIE” AND “LAW” ALMOST SOUND THE SAME…

No matter how good a contract seems, and no matter how many benefits and perks they might seemingly give to an employer, all it takes is one big lie to cast suspicion upon everything else that is written.

3.85 Due to the laws of immigration, a teacher completing his/her contract with James English School, must leave the country no later than thirty (30) days after the completion of that contract or satisfy the authorities of the immigration department that proper and adequate visa sponsorship has been obtained.

This is an egregious lie.

There are no immigration laws that state that a person must leave Japan within thirty days of ending their employment with a company.

Once you leave a company, you have 14 days to inform your local immigration bureau that you have left your job, and around 90 days in which to find a new job before the Immigration Bureau MAY begin the process of revoking your right to stay in the country.

The inclusion of the lie seems to be there just to scare people into not terminating their contracts early (and not working for rival companies).

For a new employee, the Labor Standards Act stipulates that ten paid holidays must be given to an employee no later than six months after the starting date of their employment.

(5) The employer shall grant paid leave under the provisions of the each preceding paragraphs during the period requested by the worker; provided, however, that when the granting of leave in the requested period would interfere with the normal operation of the enterprise, the employer may grant the leave during another period.

However, in conflict with those laws…

4.14 Requests must be submitted for approval to management through the management coordinator using the specific form at least two (2) weeks and no more than six (6) months prior to the desired vacation date.

4.16 If a teacher wishes to take a consecutive holiday linked with the New Years or Obon holiday, he/she may take days off either before or after the holiday, but not both.

4.17 Non-fixed paid vacation will not be allowed in the last month of employment.

There is no legal requirement that an employee must give advance notice of paid holiday use to an employer – you have the right to use a paid holiday whenever you like. In some cases two weeks might be appropriate but at other times even a few days notice should be fine.

Finally, James English School states that an employee cannot take a day off “either before or after” a holiday period, and “will not be allowed” to take a paid holiday “in the last month of employment”.

A teacher who successfully completes this contract, gives three (3) months’ notice, leaves the country within a month, and agrees not to return to work in the prefectures where James English Schools operate for at least 1 year will receive ¥100,000.

Offering someone ¥100,000 to leave the country (so that they won’t go and work for a competitor) is deplorable. In addition, it’s unlikely that a court would uphold such a condition.

OTHER WORK IS PROHIBITED

5.21 The school may dismiss a teacher under the following circumstances and his/her termination allowance and non-fixed paid vacation will be forfeited.

2. In the event that a teacher performs free-lance teaching, paid or unpaid.

Taking these illegal clauses and points of concern into consideration, is James English School a bad place to work at?

Ultimately, that’s a question that only the people who have worked there can actually answer, but there are certainly a number reasons that could lead to someone to become at odds with management and/or the company in regards to some of these employment conditions.

6.12 All sections and clauses incorporated in this Agreement are assumed to be in agreement with, and subject to, Japanese Law. Should any section or clause be found in violation of Japanese Law, the school will expeditiously inform the teachers of said violation.