First of all, take a look at the following: http://www.takatsuki-intl-assn.or.jp/?cat=21

This is the website of the Takatsuki International Association (TIA). The photos that have been uploaded there are of the visit from the delegation from Toowooma, Australia, last autumn.

Just below the fourth photo from the top, a caption reads: “今回は残念ながら公務のため来訪されなかったトゥーンバ市・アントニオ市長からの親書とギフトを濱田市長が受け取りました。” 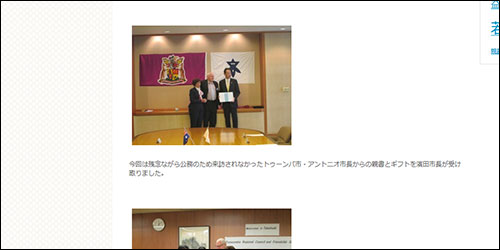 In English, this reads as: “At this time, I received a personal letter and a gift from Mayor Antonio of Toowoomba City, who could not visit due to official business at home.”

This is a complete lie.

The fact of the matter is this:

In response to this request, Takatsuki City sent a letter back to Toowoomba City, which (paraphrased) reads as follows:

“I am quite delighted at your letter, announcing the Mayor, Mr. Paul Antonio and you have strong intention to visit Takatsuki. And I’ll treat this sincerely. As you may have known, Takatsuki city is in the middle of the legal dispute with the labor unions (General Union and Northern Osaka Joint Labor Union). The Osaka Labor Committee’s (OLC) investigation seems to extend over a long period.

Last year, we had agreed to suspend the program for one year to review it because various issues were raised. Then, some AETs, dispatched in 2014, had pleaded for relief on the issues of their treatment with the Osaka Labor Committee. After that, the city has been facing the hearings by the Osaka Labor Committee, which seems to extend over a long period.

We’re supposed to start a discussion on considering the program soon. However, I consider that it could be too early, because the OLC could affect the program enormously. Therefore, I’d like to suggest that we postpone starting that discussion until the time when I’ve clarified all the issues in the circumstances after the ruling by the OLC, and then we start the discussion. I’m going to contact you at the right time for us.

Under the pretence of “[t]he Osaka Labor Committee’s (OLC) investigation”, Takatsuki City impolitely refused the request. This is why neither Mayor Paul Antonio nor Mr. Brian Pidgeon were part of the delegation that visited Japan, last year.

So, that brings us to the question of why Takatsuki refused the request.

There are two key points to consider when seeking an answer to this problem:

1. If the planned discussion had gone ahead as planned, Takatsuki City would have had to explain why they had proposed the suspension of the AET program and risk angering Mr. Antonio and/or Mr. Pidgeon, given that the both the mayor and the CEO of the TRC already knew a great detail regarding the facts of the situation via the media and the General Union. Takatsuki City would have had a difficult time attempting to twist the facts and bend the truth in the presence of people who were certainly not ignorant about what had been going on.

2. Again, if the planned discussion had taken place, Takatasuki City would have had to find an answers for Toowooba City regarding the program being (or not being) “in compliance with the law” vis-a-vis the reasons for the Osaka Labor Committee’s investigation.

Takatasuki City has found itself in a position of not being able to say anything reasonable about the AETs that they fired, nor about the circumstances leading up to, and following from, that catalyst.

Faced with these inconvenient truths, Takatasuki City has adopted a simple policy: either keep your mouth shut, or spin things in the hope that no one will notice.

Regardless of these underhanded tactics, the General Union will continue to move forward in its pursuit of justice because we know that it’s the right thing to do.

As Buddha (may have) said: “Three things cannot be long hidden: the sun; the moon; and the truth.”