In 2013, the Central Disaster Prevention Panel predicted that if a magnitude 7 earthquake hit the below the Tokyo 23 wards then the estimated death toll would be 23,000 people. According to a government estimate, there is a 70 percent chance of a quake with a magnitude of around 7.0 occurring in the southern part of the Kanto region in and around Tokyo within a 30-year period.

Gaba, now owned by Nichii Gakkan, has a legal responsibly to provide instructors with an evacuation location in the case of an emergency. We need to know where the evacuation points are and how to get to them.

This is the emergency poster at Shimbashi Learning Studio in Tokyo: 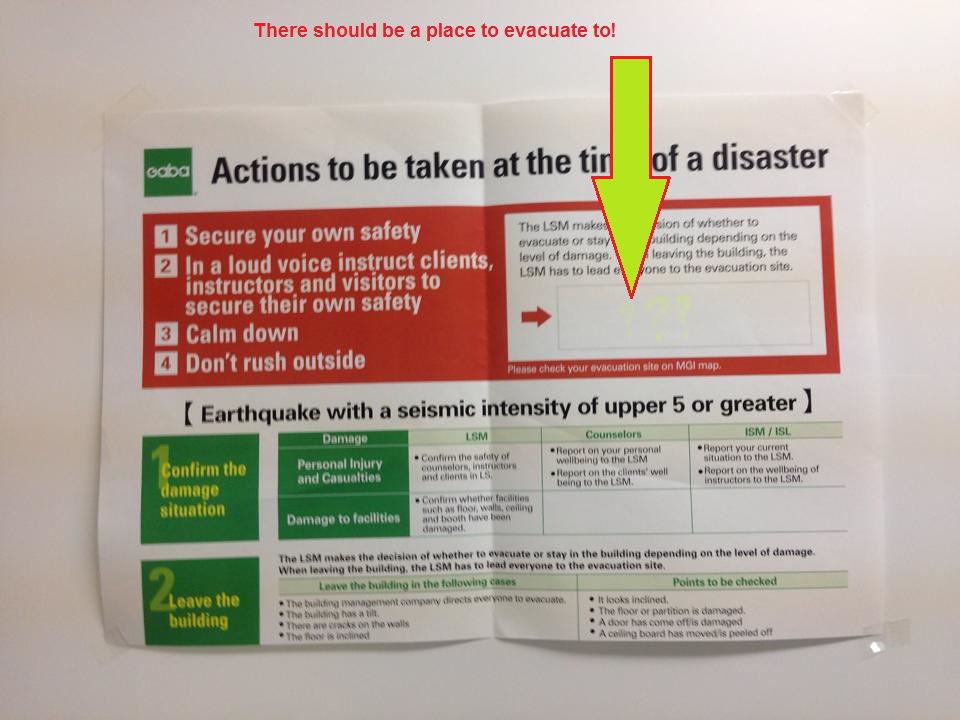 No evacuation point is visible, and the evacuation instructions are not complete. The poster has been like this for over a year.

The issue of failing to provide adequate information about emergency procedures has been a point of contention between the Union and Gaba for some time. In May and June of 2013 Gaba held emergency drill training in seven out of its then-40 LSs, during which they indicated the emergency procedures for those specific LSs, they also failed to adequately explain why there only two or three helmets available per LS.

Instructors who have asked Gaba staff have been told that there is one helmet for the Japanese manager and one for the instructor manager. In another LS there are notes suggesting that instructors “cover their heads with their bag” if debris is falling outside.

The union is actively pursing Gaba over this issue. Earthquakes are an inevitable part of life in Japan, and the very least the company can do is make sure all its staff, including instructors, are adequately prepared. We are looking forward to hearing about what improvements the company is planning to make.