In 2010 the General Union began organizing at Kansai Gaidai, making a complaint about the university’s failure to enroll union members on shakai hoken (health insurance and pension). The GU also demanded changes in the limited term contract  system. As a result in April 2010, we won enrollment on the social insurance, and a new grievance system. After informal negotiations the university signed a labour agreement that recognized the right for union members to get a second five years of employment without returning to their home countries or taking a six month break.

However, in April 2013, with the amendment of the labour contract law, after five years  of employment, employees would have had the legal right to request an unlimited term contract. The university wanted to prevent this at all costs, so they attempted to force teachers out by non-renewing them after their fifth year. In ending employment beyond five years they broke with their previous employment practices and the labour agreement signed with the General Union. This involved mass unilateral non-renewals, that were, in the GU’s view, illegal.

The General Union pointed out that this rush to non-renew was to evade clause 18 of the labour contract law and was a breach of the agreement with the union. All union members also had in legal terms ample expectation of employment beyond the five years. In addition the union publicized its legal view that the policy of non-renewal after repeated contract renewals was in breach of article 19 of the Labour Contract Law. In March 2013 the General Union filed a case of Unfair Labour Practice at the Osaka Labour Commission, alleging that the breach of the Labour Agreement and the non-renewals broke article 7 of the Labour Law.

Despite negotiations and the hearings at the Osaka Labour Commission the university’s hard line attitude did not change initially. At the end of July they sent the GU notice of their intention to unilaterally end the labour agreement. In September the union threatened the university with dispute acts such as group lawsuits, strikes, and the reporting of irregularities with overtime work and workers representative elections to the relevant authorities. In addition, union members began to distribute the union news and surveys outside the university gates. The university’s headquarters was caught by surprise, getting representatives to stand with boxes collecting the leaflets from employees, adding to the chaotic situation by committing further unfair labour practices. 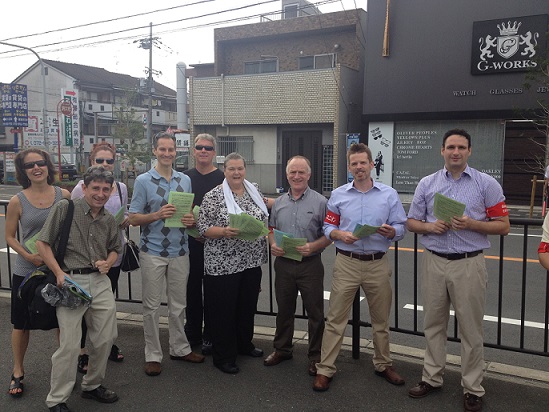 Union wins withdrawal of the non-renewal of seven members

The show of strength by GU members and their determination to take further action to preserve their employment began to have an effect and the university adopted a more conciliatory stance. In January 2014 the union achieved a victory at mediation at Osaka prefectural labour commission. The university concluded an agreement giving union members approaching the limit who wanted to continue their employment, a further five year contract. Following from this, all of the seven union members who were threatened with non-renewal in the next two years are happily continuing their employment.

Naturally universities have full and part-time faculty teaching classes, but Ritsumeikan, Kansai Gaidai and a section of universities  have incorporated into their systems cheap disposable full-time teachers on limited term contracts. Moreover these jobs often have a limit on renewals. This time Kansai Gaidai failed in their attempt to non-renew teachers to avoid the requirement of the amended Labour Contract law to grant permanent employment. In the opinion of the General Union, every employer after five years should give their workers permanent status. At the very least, they should allow them to continue to renew their contract if they so desire. Resorting to non-renewals in order to avoid the previsions of this law is in our view unforgiveable.