What are the problems? In particular, the falling school age population has led to a savage competition between schools. Schools administrations have attempted to compete at the expense of workers by worsening pay and conditions. Full-time teachers, while often receiving reduced bonuses, have been pushed to take on extra responsibilities, and in some cases teach more classes. Teachers have traditionally worked unpaid overtime, often consoling themselves with extra free time in school breaks. However, administrations have shortened this time and increased responsibilities during these periods. The GU has received reports of 60 or 70 hour weeks and of Labour Standard’s Office investigations of schools. The number of teachers on limited term contracts has been increased at the expense of the number of permanent employees.

While full-time teachers are being pressed to teach more classes for the same pay, part-time teachers, who rely on the number of classes to maintain their income, may turn up school in April to find that they have had their class load, and income reduced by as much as 50%. Schools have also attempted to cut pay rates per class for part-time teachers.

What can be done? While there is not much trade unions can do about the birthrate the situation is not helped by the fact that most unions in the sector are school based, or represent only sections of workers, often those on permanent contracts. There needs to be action organised to maintain conditions working conditions across sector to defend pay and conditions.

What we’re fighting for: 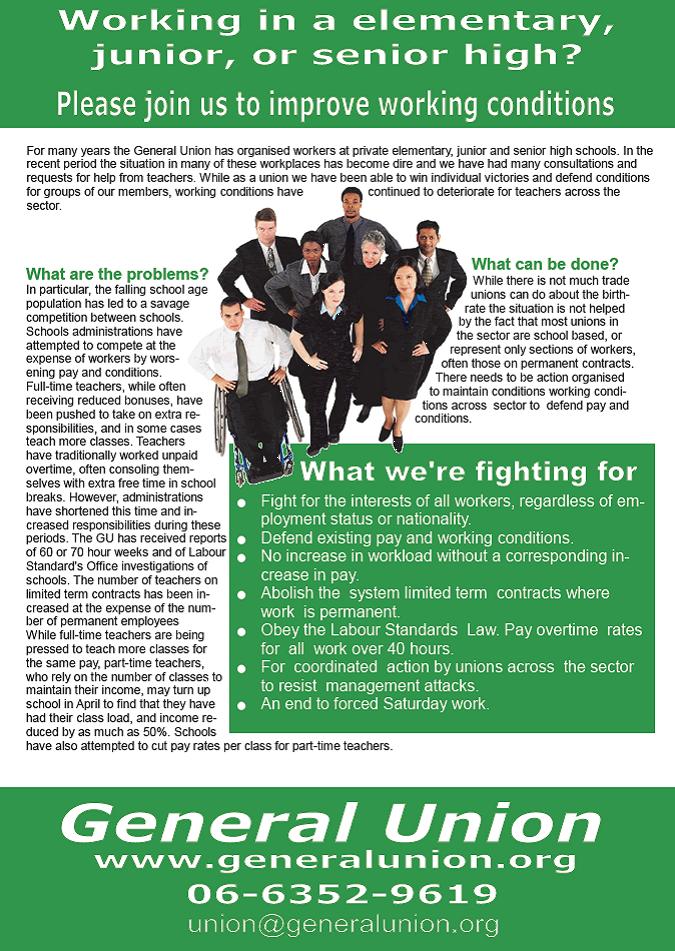