We are now happy to report that things are moving in the union’s favor. Firstly, GABA’s claim of libel against the union was found to be baseless, with the case being dismissed on 15 November 2011. The ruling provided the perfect chance to begin discussions with Nichii Gakkan and GABA. In talks, the company agreed to not appeal their loss. And with the appeal deadline now passed, GABA has dropped all claims. In addition, GABA had been suing the government for the right to appeal the Osaka Labour Relations Commission’s finding that instructors are protected under Trade Union Law, and have the right to negotiate collectively. As part of the new set of talks, GABA agreed to drop the case and recognize the trade union rights of instructors, and the company’s obligations to negotiate with the union. Negotiations also covered the unfair dismissal of Francis. After almost 3 months of unemployment, Francis returned to work on 12 February, 2012 and is happy to be back at GABA’s Ginza Learning Studio. As part of the settlement GABA has agreed to negotiate the issue of employment status, which includes issues such as paid annual leave, transportation allowances, and unemployment insurances. The more people get involved, the stronger negotiating position the union has, and the more likely we are to be able to win improvements from the company. If you would like to have your voice represented, your opinions heard, and a chance for things to improve for the better for all of us, please join. To celebrate our success so far, the GABA branch is having an organizing drive. Dues have been reduced for GABA members and are only 1000 yen per month. Read more. 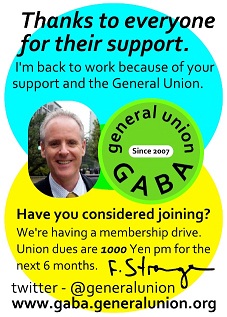