Repression and Revolt in Japan – The G8 Summit 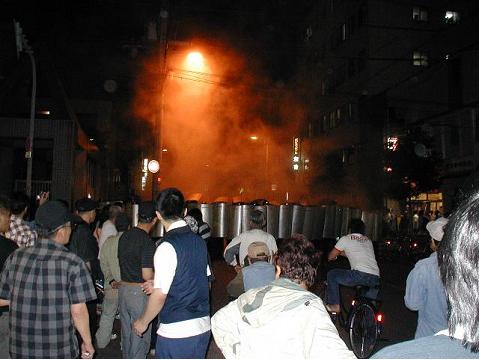 Despite this, the brave workers of Kamagasaki stood up against the stiff security environment in riots against the brutal beating of a day laborer over the past five days. The twin situations of repression and revolt deserve to be examined in more detail.

Repression In the run-up to the series of summits, over 40 people were arrested in pre-emptive sweeps of broad left and anarchist groups. On May 29th, 38 people were arrested at Hosei University in Tokyo at a political assembly against the G8. These large-scale arrests were carried out by over 100 public security agents after the students staged after a march across campus protesting the summits. All of the arrestees are still jailed, and among them are apparently some leadership of the Chuukaku-ha Leninist organization, one of the largest organizations of its kind in Japan.

On June 4th, Tabi Rounin, an active anarchist from the Kansai region, was arrested (since released) on accusation of having his address registered at a location other than where he was living. When arrested, his computer, cell phone, political flyers and more was taken from him; these items were used when detectives interrogated him, asking him about his relationship to internationals possibly arriving for the G8, as well as his activity around Osaka. He would be the first obviously political arrest masked as routine police work.

On June 12th, an activist from the Kamagasaki Patrol (an Osaka squatter and anti-capitalist group), was arrested for allegedly defrauding lifestyle assistance payments. This person has been constantly followed by plainclothes police and even helicopters during demonstrations. Clearly, his arrest was planned with the idea of keeping him away from the major anti-summit mobilizations and he will be held without bail for the maximum of 23 until the summit is over. The office of an anarchist organization called the Free Worker was raided in order to look for ‘evidence’ in this comrade’s case. The same day the Rakunan union in Kyoto was raided, with police officers searching their offices and arresting two of their members on suspicion of fraudulent unemployment insurance receipt. One of these two arrested are accused of funneling money received from unemployment insurance to the Asian Wide Campaign, which was organizing against the economic summits. In the meantime, Osaka city mobilized thousands of police with the pretext of preventing terrorism against the summit, setting up inspection points and monitoring all around the city. But the strengthened state high on its own power inevitably deployed it in violence, and turned the day laborers of southern Osaka against it in riot.

Revolt Kamagasaki is a traditionally day laborer neighborhood that has experienced over thirty riots since the early 1960s. The last riot in Kamagasaki was sparked in 1990 by police brutality and the exposure of connections between the police and Yakuza gangs. The causes this time were not much different. A man was arrested in a shopping arcade near Kamagasaki and taken to the Nishinari police station where he was punched repeatedly in the face by four detectives one after another. Then he was kicked and hung upside down by rope to be beaten some more. He was released the next day and went to show his friends the wounds from the beatings and the rope. This brought over 200 workers to surround the police station and demand that the police chief come out and apologize. Later people also started demanding that the four detectives be fired. Met with steel shields and a barricaded police station, the crowd began to riot, throwing stones and bottles into the police station. Scraps with the riot police resulted in some of their shields and equipment being temporarily seized. The riot stopped around midnight with the riot police being backed into the police station.

The next day they brought over 35 police buses and riot vehicles into the Naniwa police station with the intention of using these against the rioters. During the riot, the police surveilled rioters from the top of the police station, from plainclothes positions and from a helicopter. Riot police with steel shields were deployed all around the neighborhood in strategic places to charge in when the action kicked off. The workers organizations which by the second day were maintaining the protest had chosen a good time to do so because the police department proved unwilling to unleash the direct, brutal charges seen in the 1990 riot due to the international spotlight focused on them. On Saturday a police infiltrator was found in the crowd, pushed up against a fence and smashed in the head with a metal bar. The riot has lasted since the 13th and every night there is a resumption of hostility between the day laborers and the cops. Workers so far refuse anything less than the fulfillment of their demands in light of the police brutality incident. Despite the call from more ‘moderate’ NGOs to ‘stop the violence’ there has been no let-up in hostility towards the police, although the real level of violent confrontation is not as strong as the weekend of the 13th-15th.

The riot has been characterized by the participation of young people as well as the older day laborers in confrontation with the police. As the guarantors of everyday exploitation under capitalism who have to assertively maintain the constant dispossession of the urban working class, the police have many enemies. This they are finding out every night. Over the past couple of days there have been points where more than 500 people have gathered and rioted around the neighborhood. Police have responded mainly by defending the Nishinari police station, their home base, while getting back up from the local Naniwa police station, which has a riot countermeasure practicing lot, and holds tens of anti-riot vehicles. Despite this mighty arsenal, the police were perhaps surprised when they deployed their tear gas cannon on the first day only to be met with cries of joy and laughter. The use of force no longer has any spell of intimidation, it is simply expected. Still, the combined brutality of the police and their riot vehicles has netted over 40 arrests (including many young people), many injuries and even blinded one worker with a direct shot of tear gas water to his right eye. The struggle here is inevitably limited by the particular situations of day laborers, who are dispatched to their job sites and have no direct access to the means of production that standard wage workers would. This prevents them from for instance calling political strikes against police brutality, and hitting powerful interests in the city where they really hurt.

As workers deprived of these means to struggle, the day laborers will always have the riot as a method not only of collective defense but for also forcing concessions from the city in the form of expanding welfare access, creating jobs, backing off of eviction campaigns etc. While these are more or less important gains strictly in terms of survival, it is important to explore the possibilities of spreading the antagonism of the Kamagasaki workers to the larger population of exploited people in order to imagine doing away with this power structure once and for all. It is unclear exactly where the situation is headed, but we can know for sure that the real repression in Kamagasaki will arrive after the summits have ended and the focus is off of the Japanese government. Then we will see the raids, the arrests and the scapegoating of particular individuals for the righteous outburst of class violence that these riots are.

Instead of quietly accepting their fates as people to be trampled upon, the participants have directly attacked the wardens of wage labor who guarantee the violence of everyday slum life. Overall, the ongoing repression against those involved in organizing against the G8 summit as well as Kamagasaki should not convince anyone that the ruling class here is once again afraid of the working class. In repressing certain left groups organizing against the economic summits, the Japanese government is more interested in preventing a movement from emerging that starts to question capital at the macro level, than actually attacking an existing one. On the other hand in Kamagasaki, the state tries to deny the possibility of antagonism in a major metropole and the visibility of this revolt, for fear of it spreading. This is why most news reports have blacked out the ongoing riots in Kamagasaki.

The concreteness and universality of the Kamagasaki revolt truly threatens to expand beyond the borders of police violence. Visitors to Kamagasaki from near and far have over the past five days participated and found their own struggle in riots fought by total strangers. The ruling class fears and knows that it cannot control this horizontal sympathy and the real practice of revolt that accompanies it.